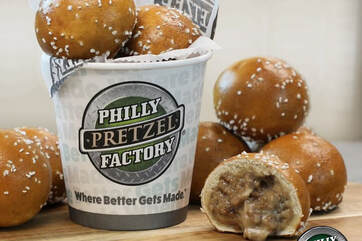 Yo, how's it going? This is Hal In Philly with another Phillycentric episode of Easy When You Know Hal.

Yeah, so I started out by saying Yo, because I'm "Hal in Philly". I've been doing this podcast now for half a month now; few weeks. And I've been doing the Tales of the Road Warriors podcast since January of 2019 of this year. So that's two podcasts I'm doing. I hardly ever talk about Philadelphia, and yet, I call myself Hal in Philly, so there's no excuse.
So today, I'm going to talk a little bit about Philly, because I got this I got this newsletter called Billy Penn. The editor is a journalist and food writer by the name of Danya Henninger. Danya now publishes this new enewsletter - Billy Penn. I think I came across it and subscribed to it after I contributed money to WHYY which is a PBS station... y' know public broadcasting, and started getting these newsletters and they're all about Philly. She does a great job of promoting our town in many ways but this one article caught my eye. (Danya, full attribution I just want you to know I'm reading your article in parts of this verbatim).

So the headline says, "These bite size pretzel cheese steaks are brilliant and in stores now" Then the subheading is, "Two Signature Philly Foods Combined For a Solid Party Snack." So yeah, get this! They they've combined soft pretzels and cheesesteaks, so you I can't wait to get my hands on one. So here's what she says; this is Danya talking  "...meaty and cheesy with just enough bread to soak up the savory overload. Cheese steaks don't miss when it comes to satisfaction. But the sandwich does lack one thing... Shareability..." And she goes on to describe how, you know, when you try to cut a cheesesteak in half, you know, it gets pretty messy.
​
Then she writes, "Philly Pretzel Factory to the rescue. New on the locally based chains menu is a snack that combines two Philadelphia signature foods in a portable, sharable bite called mini cheese steaks.The  one quarter inch diameter pretzel fingers have a soft exterior packed to the hilt with frizzled beef and cheese. Introduced on November 11, The new item is now available across 170 plus locations."

You know, I have a feeling that's going to be like 570 locations soon, because if they're as good as they look, they're going to need to open some some more stores. They're probably gonna have to open them in New York and New Jersey and Maryland and Delaware. Maybe even in Florida.

Anyway, they look really good. So Danya, thanks for turning us on to this this delectable looking treat. There's also some pictures that she's taken. Oh my God, there's one. You can see one cut in half so you can see the meaty center the meat etc center. Wow!

So anyway, a little bit more about Danya. (You don't owe me a thing...  this is all free publicity). I think my podcast currently has a total of 20 listeners (maybe 60 tops). Okay, so, Danya Henninger is editor at Billy Penn. I'm reading her bio… She's been writing for Billy Penn since it launched in October 2014. In January 2018, she was named acting editor and assume full responsibility for the newsroom in March of that year. And then she lists some of her gigs which includes work that she had published in the Philadelphia Inquirer. By the way, the Philly Enquirer is the big paper here in Philly. We use to have The Bulletin, too (I miss The Bulletin) but the Philadelphia Inquirer and the Northeast times and they've kind of withstood the test of time so they're still standing.
She wrote for All About Beer, Craft Beer and Brewing and Edible Philadelphia. She grew up in New York, then wholeheartedly adopted Philly as her new hometown. In 1997, she founded a photo video firm called Imagic Digital with her husband Mark Henninger. So I actually checked out her her personal news site which is called Imagic Digital.
imagicdigital.com
There are some gorgeous 360 degree photos there of the streets of Philadelphia and they are stunning. So check it out. imagicdigital.com - Take a look.

I'd like to quickly add a little bit more about Philadelphia. I lived in LA for about 28 years. I was 24 when I left. But up until that point, I never really appreciated this town as much as I do now that I'm back. And one thing I noticed when I go to center city, there are brass plaques on the outsides of a lot of buildings. And each plaque describes the impact that that building had on the history of the United States, because Philadelphia is one of the original 13 colonies. So a lot of the buildings here date back to before the Revolutionary War, the times of George Washington and Betsy Ross and all Benjamin Franklin, the Liberty Bell.

When you go to Independence Hall, or the Betsy Ross house, they're not the only places that have impacted our history. There are churches and and storefronts and homes and all factories. There are little breweries. You could take a walking tour somebody there's there are people who give walking tours. But as you walk the streets, read the plaques on some of the buildings, the fascinating. Get yourself a free history of Philadelphia and the United States of America.

So, that about wraps it up for this episode. The next time I head out and about, I'm definitely going to stop in a Philadelphia Pretzel Factory. According to Danya's article. They sell the bites for around $4 per four pack so it's $1 each. They're usually available at stores starting around 11am and you can also order catering catering trays starting at $40 for two dozen So hey, you know what, you can have a party with these things. So next time you and your friends get together to watch a game grab some of those Philadelphia pretzel cheese steak snacks.