SO GLAD I SCORED THIS! 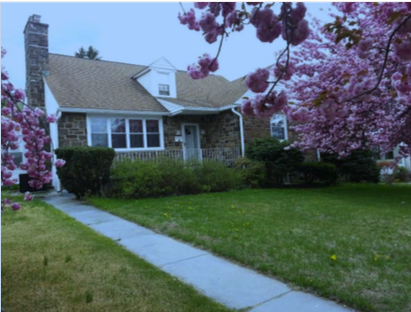 I moved into my current situation in 2015. It’s basically the in the basement of very nice house in Norristown. I had been recuperating from colorectal cancer in the computer room of my sister’s house for about 18 months, maybe longer and the time had come to get out of her hair. Besides, there was just no way I could deal with the claustrophobic conditions of being confined to that tiny space in a room under the stairs and the annoying clip-clop early in the morning - EVERY morning, of the Chinese exchange students clunking down the stairs in their clunk shoos on the way to school.

So when the time came when my nurse gave signed off on my permission to go back to work. I been looking for my own apartment or house to share. My sister helped my comb the ads and she found this one on Craigslist
​
“Get your own room, your own private entrance, your own parking spot (not on the street) a backyard to use in a quiet neighborhood. The room is located downstairs for people that need privacy. The room is cool in the summer and comfortable in the winter. The walls are new construction, insulated. The floor is carpeted. Bring your own furniture. There is a kitchen in the same floor if you want your own eating area as well. There is space for a small fridge, toaster and microwave. There is a full kitchen upstairs if you want the company. The floor also has a bathroom and a bar, couches for lounging. There is also lots of storage in the house and outside above the garage if you need it. The house is 1200+ Sq Ft with porches in the front and back. It also has a propane grill that everyone uses when they want.
The rest of the house is free to use (with the exception of the other occupied rooms of course). We all use the kitchen and bathrooms (there are 2 in the house) and clean up after ourselves. One pet is ok. Outside smoking is ok. Laundry is free and in the house. There are 2 other guys also renting rooms who pretty much keep to their own rooms.”
So I drove out to Norristown to meet Michael, the owner of the house and he’s also one of the roommates.  I knew instinctively this was the one and I gave him the rent and security with out hesitation. I’ve been here ever since.

So, one of the first things I needed was a saucepan. I had a whole set of pots and pans in a box in my sister’s garage or basement, but I wanted to heat something up immediately, so I ran to a nearby Target and got a two quart non-stick sauce pan. Cheapest one they had and one time, I came to hate it. Over the course of a couple years, I had dropped it a few times. It got bent out of shape, the non-stick surface was starting to chip, plus, it boiled over constantly. I still had never gotten around to finding my other cookware, but my roommate from when I lived in NE Philly had pretty much ruined most of it anyway. It was a brand new set of Circulon non-stick cookware and I had paid a lot  of money for it. But when my friend moved in, the first thing I requested was that- if he wanted to use my pots and pans, please use the plastic spatulas and stirring spoons and don’t ever scrape them with a fork or other metal utensils.

Unfortunately, he had mental health issues and my pleas went in one ear and out the other. He managed to destroy the coating of every piece of cookware I owned in about a month. Shortly after, I had to leave that situation anyway when I got the cancer diagnosis.

So, here I was with yet another pot, an all bent-up, defective, nearly useless saucepan and I decide my next one would be perfect for any purpose. So I wanted to tell you what I ended up with because it really did solve the problem perfectly.

Now  my mission was to get a pot I could boil water in for a cup of tea in the evening, and still be big enough to make pasta. My last one, a 2 quart, non-stick saucepan wasn’t really roomy enough to boil water for pasta without it running over if left unattended  for a moment too long. The usual 5 quart pot just takes too long to boil and besides, it’s not practical if you just want a cup of tea or a bowl of soup. Also - I  made up my mind - no more non-stick shit. So this time, I decide to look for a more permanent solution. What I ultimately found was a Cuisinart three-quart stainless steel saucepan, and people!
Let me tell you. I love this pot! 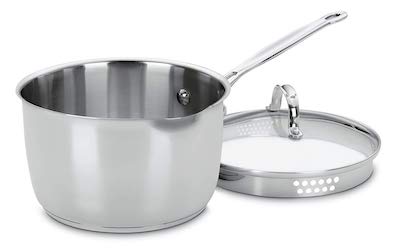 ​This is some. really. great. pot! It is perfect for every cooking task a single person like me could want and in fact, I love it so much, I’m putting a link to it on my show notes page in case you need a new saucepan, yourself. It’s between 30 and 40 bucks depending when you buy, but it is so worth it. Oh, I forgot to mention… the handles don't get hot, it has a strainer built into the lid too!

So, I’m sorry if you’re a pot smoker and were hoping this was  going to be about legalized marjuana, or something. But then again, if you’ve got that covered and you get the munchies, this pot will come in handy. And handy is what it’s all about!
Because it’s… EASY WHEN YOU KNOW HAL!