Close Encounters of the Blaine Kind 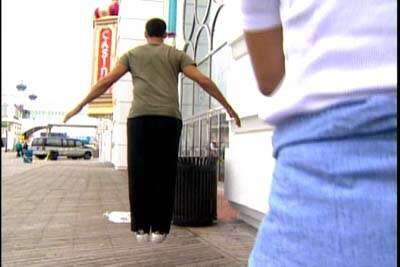 Welcome to another mysterious episode of Easy When You Know Hal.

One of the most inexplicable phenomenons I have ever encountered in my life took place on a weeknight, I’m thinking it was a Monday. about 1 o’clock in the morning, so technically, I guess that would make it a Tuesday, but it was Monday when I arrived for work at 6 o’clock to relieve Brenda, the day bartender. She was about 6’4, …what the old timers at the bar referred to as a “tall drink of water”. Everyone loved Brenda. I haven’t kept in touch with her since I left L.A, but I have fond memories of working with her at the Starlite Room in Studio City.
In fact, I enjoyed working at the Starlite Room a lot. Great group of regulars, and the owners, Risë and Al were like working for my own Mom and Dad. I’ll probably tell you some more stories from my old Starlight Room days as time goes by.
On this occasion, it was early in the week, near closing time, the bar was completely empty and I really did’t expect anyone and I was about to start restocking the bar when three guys in their late 20’s, maybe early 30’s came in and sat down at the end of the bar right by the door.

They ordered three beers, and I, trying to be a good host, offered a some friendly small talk as I set the beers down. Now this was a very small bar. I think the total legal occupancy was about 28. Number 29 would have to stand. I asked them, “How was your evening, and one of them said, “Fine.. I asked, Where you coming from?” he said, “We were just having some appetizers at Aroma Cafe (which was about a half block away on Tujunga). “Are you guys from New York? They had pretty detectable New York accents “Yeah, we’re in town for some meetings”.

“Oh, okay, I said” having no idea what that meant.  I assumed they were actors or writers meeting with some big studio exec to pitch a screenplay or something. This is pretty common in the local eateries in Studio City. Well, I didn’t want to get too nosy, so, I went back to restocking the beer cooler, when I thought I heard one of them talking to me. He said, “Did you ever see anyone levitate?”

“I’m sorry,  were you talking to me?” I asked as I turned to look at this skinny, dark-haired guy, with olive skin and a 5-o’clock shadow.
He repeated, “Did you ever see somebody levitate?” i

I said ,”Watch what?” and bomber jacket guy just puts a finger to his lips, looks me in the eye and shushes me. “Just watch, he says”

Then, the thin dark haired guy gets up off his bar stool, and takes a couple steps toward the dart board. He just stands there arms at his sides staring straight ahead. At least a full minute goes by and nothing is happening. Nobody is saying a word. Even the TV is on with the sound off. Maybe the sound of a car going by outside the bar, but that’s about it.

I think I started to say something, but bomber jacket guy says again, “Just keep watching”

Ever so slowly, this guy standing in front of the dart board starts to rise up off the ground. Now, I’m a bartender and an entertainer. I have friends who are professional magicians. I’ve been to the Magic Castle a few times. I know there’s a way to stand at a certain angle so it appears that you’re hovering above the ground. I also know that in certain circumstance, you can set the stage in advance to accommodate  certain illusions. But this was the Starlite Room. This guy was standing on a concrete floor and there was nothing prepared in advance. They had only walked in off the street moments ago for the first time - ever. My first instinct was to run around to the outside of the bar and get on my hands and knees and look under his feet to see if he was simply standing on one leg. He wasn’t. This guy was about 7 or eight inches completely off the ground. And I couldn’t help nut notice he was wearing army boots. SO as if he wasn’t heavy enough already, he’s got the added weight of his boots off the ground. And I’m staring at nothing but air underneath him. He remained there for at least a minute. Maybe two. I walked back behind the bar totally dumbfounded. I couldn’t think of a thing to say.

He finally came back down to Earth and sat back down at the bar. I was still sitting on the beer cooler speechless. At last I asked him, “How did you do that?”

Yeah right, Like there’s this huge community of people floating around out there. This night haunts me for months afterward. The first thing I did the next day was search Google for the word Levitation. I figured a search in the world of levitation might lead to this guy. Well, sure enough, I found a picture of him. His name was David Blaine and he appeared to be some sort of street magician who enjoyed walking up  to random people and blowing their minds in some way. He’d levitate, stick nails through his hand. Cut off someone’s arms and reattach it.  Really whacked out shit. but none of this explained how he actually did any of this stuff. I think I got the answer about a year later.

I’m back in Philly. Well, Cheltenham, technically. But if I walked across the street, I’d be in Northwest Philadelphia. I had moved into my sister’s house into a little  add-on unit with my little cocker spaniel, Joey.  I’m still missing L.A. so I find the KLOS radio station broadcasting live on the internet. One day, I’m listening to their morning zoo crew, Frosty, Heidi and Frank. And they’re talking about this special they had just seen on TV by this magician named David Blaine. I guess, that meeting at Aroma Cafe had paid off, because he now had a special on network television. I hadn’t seen it myself, yet. But I gathered by the way they were talking about it… their minds were blown pretty much the way mine had been. And then one of them, I think it was Frank said something that validated what I had been thinking all along. He said, “This guy isn’t like your typical magician. I think that guy made a deal with the Devil. I’ve seen lots of magicians, but what this guy does is the real deal. It’s real magic”. I immediately, thought. okay so I’m not crazy, because I think so too.

Well, I don’t know about Heaven and Hell. The jury’s still out on God and the Devil. But I do believe in magic. Because I saw it with my own eyes. And truth be told, I try to see magic everywhere.