Going For A Drive

Yo, how's it going? This iPhilly with another musical episode of . So today I'd like to talk about my music. In particular, there's one song I wrote quite a quite a while ago. Actually, I haven't written many songs lately. So all the songs I talked about if they're mine, I wrote quite a while ago. This one's called I'm oing for a rive. And I use it at the tail end of my other podcast, Tales of the road warriors. Each episode ends with me saying I'm going for a drive and then I play a little snippet of the tail end of the song. Oh here Here it is.
Alright, so anyway, when I went to Orlando, Florida for the podcast movement 2019, also known as PM19. I met a guy there named Dave Canyon. Dave's a podcast here out of New York. And his podcast is called Dumbing It Down With Dave. The premise is...

Dave, is a truck driver. He drives his truck all week long. But while he's on his way to work, he recorded this podcast, dumbing it down with Dave. And I started listening to it after I met Dave. There's a whole long story there to what happened was when I got the podcast movement 2019 I, I had told myself when I arrived in Florida, I was going to get a beer. I hadn't had a beer in like two months, and I just was really in the mood for a beer. I got there a day earlier, just so I could do that. Just so I could have a beer and wouldn't have to, you know, worry about a hangover the next day, because, believe it or not, one beer and I have to worry about that because I had cancer. Colorectal cancer. Since I recovered from the cancer, I just can't handle my liquor the same way. So I don't have beers that often.

So, I could have just I guess I could have just stopped in a convenience store and just bought one and brought it home with me but no -  I wanted to sit at a bar and have one like an idiot, so I missed having a beer that night.

Well the next day I'm just leafing through Facebook and I'm on The Podcast Movement's Facebook Page. And this guy Dave had posted a picture of himself in front of a refrigerator full of beers and he had Arrived Sunday night, right around the same time I did. He was just staying in a different part of the city than I was. And I'm like, oh man, if I knew this guy was in town, I would have contacted in him in some way in and shared a Miller genuine or Miller high life with him whatever was beer, but I'm a Heineken drinker. But at that point, I didn't care if I knew this guy was in driving distance, I would have gone Hey, man, can I go over for a beer? 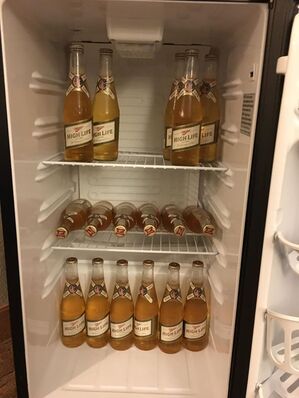 So that never happened either. But I did Meet Dave, later, at the actual event. just happened to see him on going. I know that guy. He's the guy in the picture with the beer. So I introduced myself to Dave Canyon. And we've been friends ever since. And I've been listening to his podcast, and he's been listening to mine. And turns out he fell in love with this song that I use at the end of my podcast, and asked if he could use it. And I thought for a minute, actually, not even a minute, I thought for a second and I said yeah, of course. So Dave's been using my song, I'm going for a drive on his podcast. He plays the beginning of it. I sent him the entire song. So he plays the beginning of it at the beginning of each episode and he plays the tail end of it like I do at the end of his episode. Now his fans are starting to like my song. And Dave always talks about me in every episode. I'd like to thank Alan Philly, for I'm going for a drive. I love this song. And he goes on, he's raving about the songs and now his friends and listeners are raving about the song. And I don't have that song anywhere online for them to listen to it or download it. So I'm here to tell you. If you want a copy of I'm going for a drive it will be available soon. I will post an announcement all over the place. I'm going to try to get it up there sometime this week. Try to get like $1 downloads. And believe me I can use the money, but I just never, you know, I just never got around to posting my music online.

And as a matter of fact, I have a few songs I think you guys would like. So I should, I should probably recorded an EP or an album at this point. But at the very least I can get I'm going for a drive up there because that was recorded really nicely. There's a whole story there. I'm going to tell the story of how that got recorded on my other podcast, which just tells you the road warriors, and I want to interview the guy who recorded it for me, his name is Barry keys by the way. So Barry is sending me a really nice copy of it that I could use that it's pristine, so when you download it, it'll sound great on your system and in your headphones. Okay, so be on the lookout for I'm going for a drive and I'll make it easy for you guys to get your own copy of it. Because like, like I say in the title of my podcast it's Easy When You Know Hal!