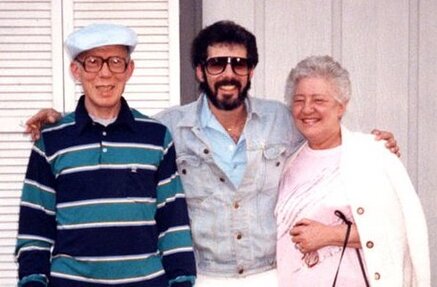 Yo, What’s up? This is Hal in Philly... Hal’s it goin? Welcome to another commemorative episode of Easy When You Know Hal!

So, yesterday was January 16th, 2020, my dad’s birthday. He died in 2004 at the age of 78. I remember writing and recording a song for him on his 65th birthday. I was living in California at the time and unfortunately, the little multi-track cassette recorder that recorded it on is long gone. I only made one copy which I sent him for his birthday and one of my biggest regrets is that I didn’t make more copies. I can’t even remember how it goes, although the lyrics, which must be in a notebook at the bottom of a box somewhere might trigger the rest of it.

However, I do remember this… The song was inspired in part by the story that I’m about to tell you. It speaks of a kinder, gentler world than we live in today. Of course, I hope that it’s just my perception of the way things are. I do believe there are still good, caring people in the world, and that good customer relations still exist.

It all started with a bottle. My father’s name was Carl. Carl H. Cohen, but everyone knew him as Todd, or as my cousins all called him… Uncle Toddy. To say he was beloved, would be an understatement. Great guy. More honest than anyone I’ve ever known in my life. And no one ever, ever ever swore in front of him. And he and my mom would never swear in from of us kids. Never. not ever.

Except one time, when my mother went to the mailbox upon arriving home after picking me up from school. She was looking at the envelopes as we walked toward the door. And out of the the blue she muttered  under her breath but loud enough for me to clearly her. “If your father wasn’t so fucking honest, we’d be rich!”
I only told a couple people what she said. In fact, this is the first time that little tidbit has been outside the vault in a long time. I don’t remember if anyone else heard her. Possibly my sister. I’ll have to ask.

Ahh, but I digress. I was talking about customer service. I think. So anyway, at the time, my dad worked for the Internal Revenue Service. He would often commute to  the IRS Center in Richmond, Virginia because the one in NE Philly hadn’t been completed yet.
He always used to bring home stuff from his trips at the end of the week. Usually, little gifts for us kids, and other times, just some little objects that he found interesting like the complimentary outdoor thermometer he picked up at a sandwich place in Clifton Heights, PA where he had stopped to eat on the way home. It had the logo at the top, “Stosh’s Steaks” - No Mistakes! And at the bottom it read, “It’s what you learn after you know it all that counts” Which has become one of my all-time favorite adages.
One evening, at the end of a long work week, he came home with a little something he picked up for himself. It was rare for him to ever treat himself to anything, being the kind of guy who would wear his shoes into the ground so his kids could have a new pair of Chuck Taylor Converse Sneakers. Back then, if you didn’t’ have a pair of Chuck Taylors, you were pretty much shunned by every kid at school.
Now at this point, I should add, that my dad was not a heavy drinker. But he would often make himself one Jack Daniels Manhattan, straight up and sip on it with his dinner each evening. That was his one indulgence. And the family always ate together. If we were to compare my life to a TV show, it would be like a Jewish Leave it to Beaver.

So this little something my dad had treated himself to was a Commemorative bottle of Jack Daniels Old No. 7, his favorite Tennessee mash. to commemorate the 80th anniversary of Teddy Roosevelt being a badass or something.  It was in a beautiful decanter with a glass top which my dad proceeded to accidentally drop immediately after opening. It shattered to bits upon impact. Fortunately, He had a nice large cork which he was able to use in it’s place, but needless to say, he was quite upset with himself having dropped the original bottle top.

Now another interesting thing about my dad… he had beautiful penmanship. So, after dinner, he sat down at the dining room table and composed a letter to the Jack Daniels Distillery in Lynchburg Tennessee and asked what it might cost to replace the bottle top. And mailed this letter the next day on his way to work.  And then life went on as usual. Until about six weeks later when a package from Jack Daniels arrived in the mail. And inside was a brand new glass bottle top for his commemorative bottle of Jack Daniels Old No.7.

I had never seen my father so pleasantly surprised by anything in his life. I think we all were blown away by it. No bill, no invoice. Just a letter, thanking him for writing and declaring him an official Tennessee Squire. And Squire Toddy lived happily ever after. But wait. There’s more…

About two months later, he received a box of tumblers, also known as rocks glasses, each one had a different toast on etched in black.
Here they are in case you have an occasion to toast somebody:
Number 1
"May you ride and easy-walking horse,
Sleep 'neath a rain-tight roof,
And eat high on the hog,
Every day of the year."

Number 2
“May your sons be brave
Your daughters marriageable
Your wife loving
And your kinfolks rich.”

Number 3
“May you always have
Red-eye gravy with your ham
Hush puppies with your catfish
And the good sense not
To argue with your wife.”

Again, this was accompanied by a letter hoping all was well, and again… no charge.It doesn’t get any better than that, now does it? Or does it…?

Another month or so goes by and you guessed it. Another present from Jack Daniels. This time it was a very large, flat envelope. Inside was a certificate of some kinda upon closer inspection, it was a deed! it seems as though Squire Toddy Cohen was now the proud owner of a one-inch parcel of land somewhere in Lynchburg, TN, on the Jack Daniels Distillery Estate. Wow! SO now he owned property! What could possibly top THAT???


Would you believe this story still ain’t over? It had now been about six months since this whole thing started and they’re still sending him stuff! Who does that? Even better… who does does this. He finally gets a letter that says something like, “Dear Squire Cohen,

Our Wyooter Hooter Hunt will be taking place, and it’s possible that another squire may inadvertently step on your property in pursuit of the beast.  You get the idea. I’m not sure when the little perks stopped coming if ever.

But here’s your epilogue.  Years later, I received a large flat envelope from Lynchburg Tennessee. It seems, Squire Cohen, my pop, unbeknownst to me, had written the good folks at the Jack Daniels Distillery to explain that his son had been tending bar for over ten years poured many a shot of Jack and was a Jack Daniels drinker, himself. Would you consider making him an honorary Tennessee Squire. And wouldn’t you know it? I’m a Tennessee Squire now, too.

So, if there’s a takeaway here, it’s this. Sometimes it’s worth it to take a few minutes to write a letter to a company just when you need their help with something. You never know who might go that extra mile - or square inch. It’s Easy When You Know Hal!