A Philly Cheesesteak Saved My Life 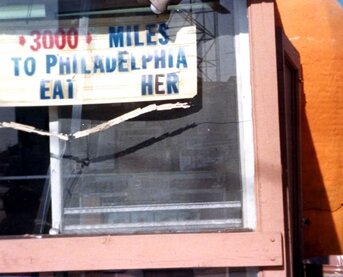 Yo! This is Hal in Philly and I welcome you into another life changing episode of Easy When You Know Hal.  I originally shared this story in  2008 with a  small circle of friends because I felt like I had to tell them what  had gone through during a dark time that lasted about for several years after I left Philly.

I categorized this podcast as Comedy, but every one in a while, I do tend to get pensive and philosophical. This one is very personal and again, it was a very dark time for me. I dedicate this to all the friends we ever had or lost who did not get out in time:

Spring, 1981
Some people who freebase or snort a lot of coke simply don’t know when to quit and one day, their heart simply stops beating. Suddenly. Yeah, cocaine will do that to you. Ya keel over and die.

Others, either realize they need help, or their friends intervene and convince them to  check into a rehab. Hopefully, after spending a few thousand bucks, they recover. Many end up going back multiple times bfore the quit finally takes.

Then there are the ones who get religion. These are usually the ones who hit rock bottm in their excesses and become, Moonies, Krishnas, Born-again Christians, Scientologists, or whatever flavor-of-the-month cult the media is making headlines (usually because of mass suicide or UFO abductions).

For me, it was a Philly cheesesteak.

When I first got to L.A. in  1977,  I almost immediately started snorting coke. I didn’t plan on it. I never sought it out, it  was just always there. When you’re a musician, surrounded by other musicians and living in Venice Beach, it becomes a part of your life. It didn’t take much more effort to find than a pack of cigarettes. Looking back now, I’m lucky I never went to jail. I simply never got caught. I  simply never knew the real risk I was taking. Until one night in 1980 (about a year before I wrote this), when I accompanied  a roommate  to score some coke from his  dealer at 4 in the morning because we were jonesing so bad for some.

By this time, I had been introduced to freebasing (what is now referred to as smoking crack) by this roommate at the time. We worked together at a rock and roll club where some of the greatest bands in California  passed through. Cocaine was so prevalent, I remember  one night going to the bathroom and while I was standing at the urinal doing my business, a hand reached around from behind and put a spoonful of coke right up to my nose while I was trying to pee. Like I said, I never had  to seek it  out. It always seemed to find me.

My roommate learned how to freebase it by putting an uncut rock of cocaine into a crack pipe, adding some kind of acid to it and then holding a flame underneath. As soon as you inhaled that first little wisp of smoke, the rush was so intense, snorting coke the old way didn’t seem to have  enough of an impact after that.

After freebasing cocaine for the better part of a month, I finally crashed and slept for three straight days (no pun intended). I had run out of money because during the course of that month, I was fired from two of my part-time jobs for my erratic behavior. Who knew? Hey, I thought I was perfectly normal while everyone around me probably thought I was either bi-polar… or doing a lot of coke. So, just to set the record straight - Yes, I was abusing cocaine.
Now around the corner from my little house on Louella Avenue in Venice, there is a sandwich joint called the Great Western Steak and Hoagie Company. What originally attracted me to it was the sign that said, “3000 miles to Philly. Eat Her.”
That’s not a typo. Someone had actually stolen the letter “e”from the word “here”off the sign. This place also had a great reputation among east coasters for the closest you could come get to a real Philly Cheesesteak. The sandwiches there were, in fact pretty damned good, and I had eaten there often.
So back to the couch where I lay in a drug induced coma for three days... I finally began to wake up and at some point, managed to drag myself off the soifa and into the kitchen where I made a cup of coffee.  After downing a couple cups o’ java, my mind was beginning to come back to its regular state of coherency. So was my appetite.  It suddenly dawned on me that I hadn’t eaten in three days.  Maybe more... cocaine manages to takes away one’s appetite pretty thoroughly. Not only was I hungry, but I was craving a Philly cheeasesteak. Don’t ask me how or why, I just knew that’s what I wanted and I had to have it NOW.  So off I went - for a walk around the corner to the Great Western Steak and Hoagie Company to score me a sandwich.
It happened that instantly. As soon as I took the first bite of that delicious sandwich, I had a moment of clarity and resolve.  I wanted to enjoy the taste of food again. I wanted to feel every breath I took from that day on and I never again would never again ingest that white powdered crap into my system... EVER. Never again would I experience the feeling of my heart beating so hard, it might explode at any second. never again would I wet the end of a Kool cigarette after packing down the tobaco and filling the tip with that deadly substance before lighting up.

I only had enough money left to my name to choose one of two habits… food or drugs. I chose food. I chose life. I made this  choice in 1981. It’s now 2019. It’s been  38 years since I last ingested any of that crap. I’ve lost a lot of friends along between then and today. I wish I could  tell you that quitting an addiction is easy. It’s is for some. Not so much for others. If anyone listening to this is suffering from any type of addiction, then, think of this as a cautionary tale from a road warrior. Unfortunately, I can’t alway promise that It’s say When You Know Hal.